Well contested 2 Towns match results in narrow win for BournemouthMartin Simons reports on the match Thurs 5 Sept 2019 at RBL Poole:
A great turnout of 58 players. The result was completely level with 2 matches to go but good wins for Susan Kageler and Peter Anderson secured the win for Bournemouth by 2 points, the final match score being 15.5 – 13.5.
Looking down the scoresheet, Bournemouth capitalised on its slight grading advantage on the top 10 boards by scoring 8 points, honours were just about even on the middle 10 boards, and Poole did not quite recover the deficit on the bottom 9 boards where it had its grading advantage. The biggest grading upset was on board 24 where Terry Walsh secured a win despite being 14 points lower.
But as we know, the winner of the evening was chess and that so many players could get together, mingle with their chess friends, to get the season off to a great start!
Many thanks to Ciprian for his excellent organisation and for being such a good host.
Martin
(pictured Susan Kageler playing for Bournemouth against Chris Ambrose. Susan has the distinction of being 5 times Zimbabwe Champion and is playing for Highcliffe this next season. Also, Rachel Richardson is Susan’s sister) 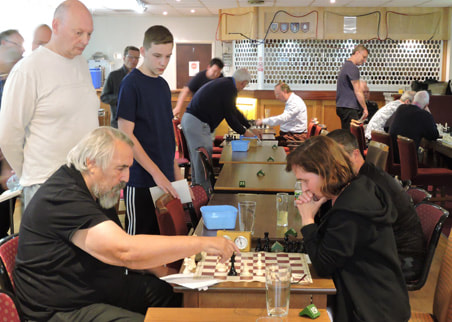 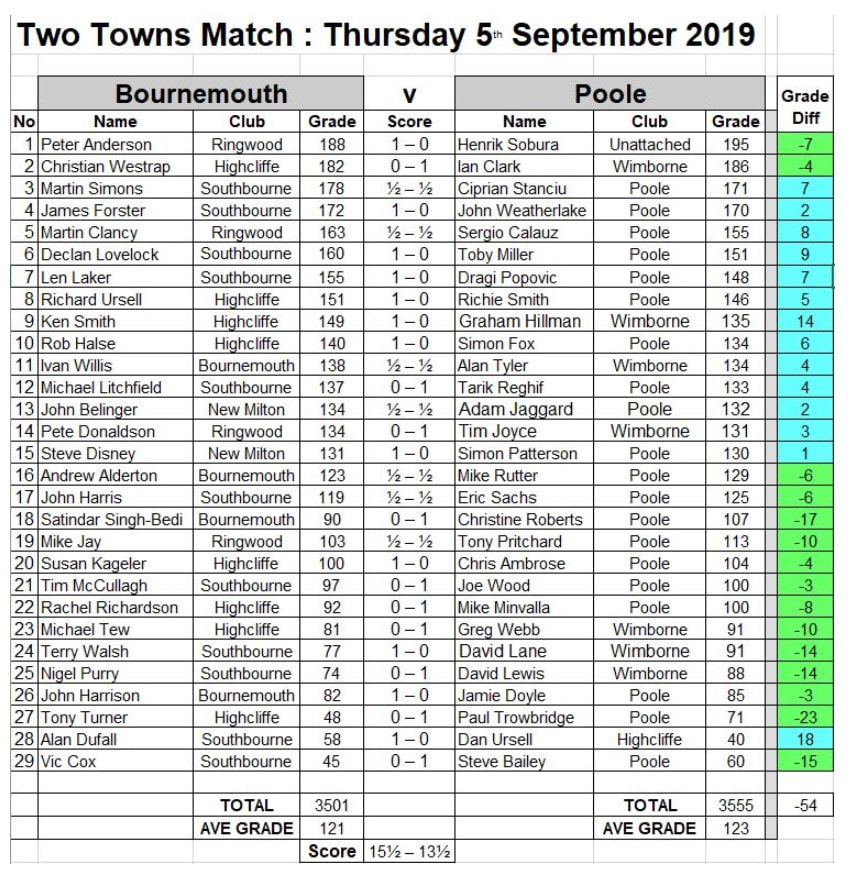 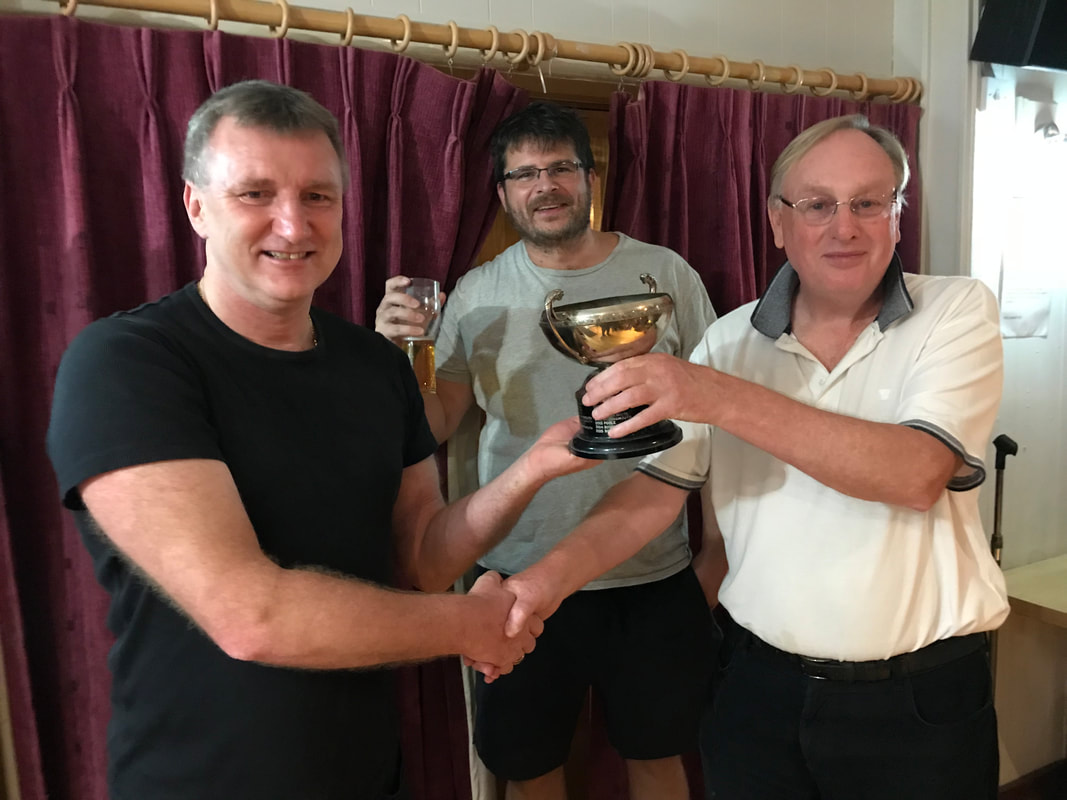 On a most enjoyable night as the season commenced with  the traditional curtain raiser, Poole beat Bournemouth 17-12 to win the trophy for the first time in 4 years. Quote from the losing captain Martin Simons “it was a great night, great venue, great spirit and some great chess and very well done to Poole”. Martin complemented his team on arriving by 7.15pm for the match and he had no withdrawals. His actual words….”proud and impressed”.
Winning captain Eric Sachs commented ‘ I am so proud of our team where 18 Poole club members took part and were supported ably by Wimborne and Ringwood players. It was a night when all the players came together, but it is lot of work arranging. Martin did much to bring all his players to the match and was very gracious in stepping down to even up the pairings on the top board. It’s nice to win at the time, and disappointing to lose on the night, but the overall success of the event and the spirit of 58 local players giving their best, playing chess, is the real winner. Special thanks to the helpers Steve Bailey, John Weatherlake, Adam Jaggard and Graham Morris for managing the bookstall etc and anyone else I have forgotten who supported the evening”.
In the main photo (top of this item) Martin, on the left passes the 2 Towns Trophy to winners Eric Sach’s Poole.
ps Many thanks to Poole for providing the excellent facilities and also the Captains – Martin Simons (Bournemouth) & Eric Sachs (Poole) who put so much work in to make the evening such a success. There were 62 on the night, of whom 58 took part 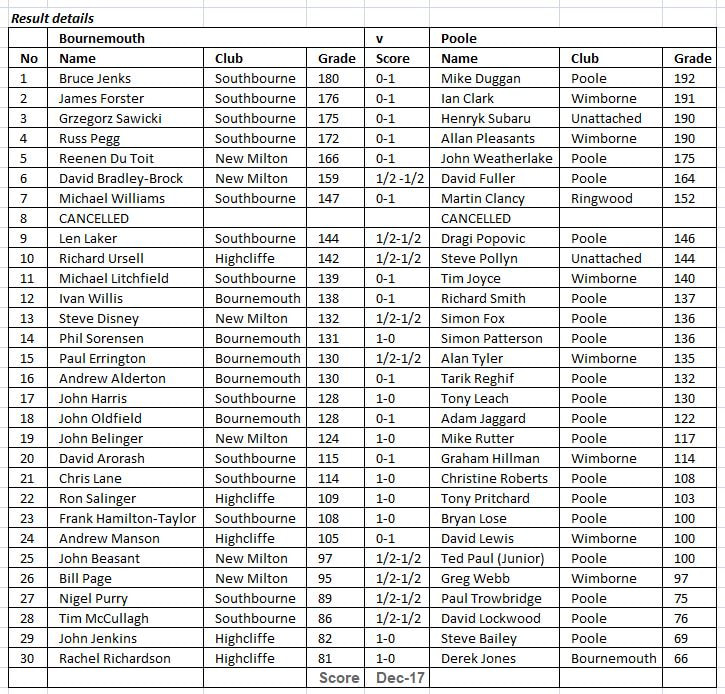 The 2 Towns curtain raiser match every season is always enjoyed and is very sociable. It is taking place again at the home of Poole Chess Club, Royal British Legion, North Road, Poole. 7.15pm for 7.30pm.  Games are non-graded.
Eric Sachs reports this year there will be a bookstall with over 150 chess books for sale @ just £2 & £3 each.
The Poole squad, captained by Eric, may comprise players mainly from Purbeck, Poole, Wimborne & Ringwood.
The Bournemouth team is skippered by Martin Simons and their players are expected to come largely from Southbourne, Highcliffe, New Milton & Bournemouth.
​But to make the evening the best possible for everyone, Eric and Martin may need to switch players so your understanding much appreciated.
To help with planning, it would be much appreciated if you could let Eric or Martin know your availability in advance. That enables a quicker start and eases complex team allocations on the night. Many thanks!
Eric’s email is: eric.sachs@btinternet.com
and Martin: m-simons@sky.com